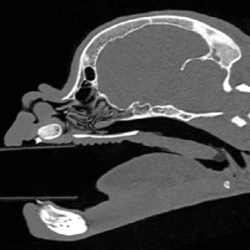 CT of a French Bulldog Head

Over the past hundred years human beings have designed for themselves a huge number of different dog breeds. The conformation of some of these breeds has become more extreme and sadly many health problems have been introduced into the dog population as a consequence. The continual increased selection pressure for ‘desirable’ physical traits has resulted in many pets presenting with more severe manifestations of certain congenital conditions and at a much younger age. If you are considering buying, or already own, a dog with a short nose such as a French Bulldog, Pug, Boston terrier, Pekingese or Bulldog then you need to be aware of the welfare issues surrounding brachycephalic upper airway obstruction syndrome.

What is brachycephalic obstructive airway syndrome?

Brachycephalic obstructive airway syndrome otherwise known as BOAS arises from the effects of a group of congenital anatomical defects present in brachycephalic breeds. Brachycephalic breeds of dogs are those with characteristically short noses such as the Pug, Boston terrier, English and French bulldog and Pekingese. Animals with shortened noses still have the same amount of tissue in their nose and throat but this is squashed into a smaller space which causes folds and wrinkles that obstruct the airways. Animals with BOAS may have one or more of the following defects:

The abnormal anatomical conformation of these dogs means that airflow through airways is impeded, resulting in noisy breathing and an inability to take on board sufficient oxygen to meet increased demands imposed by exercise. The nasal cavity has a huge surface area covered by richly vascularised tissue that in normal dogs cools inhaled air thus forming an important part of the body’s mechanism for temperature regulation. This is compromised in brachycephalic breeds and many breath through their mouth bypassing the nasal cavity altogether. This explains why many of these breeds have poor heat tolerance and cope poorly with hot weather. Hot weather also causes swelling of the tissues in the nose and throat further impeding airflow and exaggerating symptoms.

How would I know if my dog has BOAS?

Severely affected dogs may show signs of breathing problems at a very young age (4-6 months of age) although most will present with signs at around 1-3 years of age. The first signs you may notice if your dog has BOAS are that it has noisy breathing or may snore loudly whilst sleeping. In fact, many owners of dogs with short noses such as pugs and bulldogs think it is normal for their pets to snore and snuffle. However, these noises indicate that their pet’s airways are already narrowed and breathing is difficult. Dogs with BOAS frequently have significantly disrupted sleep as every time they lie down and relax their airways become obstructed.

Many dogs with BOAS are unwilling (or unable) to exercise normally and this can predispose them to putting on weight which further exacerbates their problems. Sudden deterioration in breathing may develop, leading to respiratory distress or sudden collapse (particularly in hot weather). This deterioration may be brought on by exercise and excitement. Severely affected animals may have almost total airway obstruction and can develop fluid build-up on the lungs. Animals that have severe bouts can die rapidly if they do not get emergency veterinary treatment.

When dogs are hot they cool themselves by panting. When they pant they move air back and forth over their hot airways and thus evaporate water and lose heat. Dogs with BOAS are unable to move air through their airways efficiently which prevents adequate heat loss through panting. Dogs with BOAS are at particular risk of overheating in hot weather, following exercise or when under stress.

How would my vet know if my dog has BOAS?

The diagnosis is based on the clinical signs (and typical breed) but further examination may be required to confirm the diagnosis and rule out other conditions. If your vet suspects that your dog is suffering from BOAS they will want to perform a detailed inspection of the upper airway and chest xrays with your dog under anaesthesia. These examinations are best performed by a veterinary surgeon experienced at treating this condition so that treatment can be carried out at the same time. Anaesthesia and examination without correction poses unnecessary risk to your pet.

What other problems are associated with BOAS?

There have been many reports suggesting that brachycephalic dogs often have difficulty or experience pain on swallowing and some may regurgitate or vomit frequently. This may be due to reflux of fluid from the stomach but many brachycephalic dogs also have anatomical defects in the gastrointestinal tract. Some examples of these include: hiatal hernias (where part of the stomach passes through a larger than normal hole in the diaphragm into the chest), and pyloric stenosis (where the stomach exit is narrowed preventing food from leaving the stomach normally). Always make sure you give your vet a full history of all your dog’s problems even if you think one (like breathing difficulties) is more important. In many cases treatment of the airway problem with improve the gastrointestinal symptoms but more severely affected patients may require additional medication.

Can BOAS be treated?

Most animals with BOAS will be improved if they lose weight so a dietary regime forms part of any management. Because BOAS is caused by congenital abnormalities of the airways the only way to resolve the problems is to correct the underlying abnormalities. Surgical procedures can open up the nostrils and remove excess tissue within the airways that is restricting airflow. Surgical correction requires a great deal of skill and is not without risks. Where possible, we recommend referral to a facility with 24 hour aftercare as there is a small risk of developing breathing issues following surgery. Where referral is not an option, Dr Braden is happy to perform the surgery at our Eaton Vet Clinic, though it is important to note that we do not have the ability to monitor your pet around the clock post-surgery. Dr Braden can discuss the risks with you in greater detail prior to the surgery.

Following surgery, the lives of affected animals should be significantly improved. Correction of the reversible primary abnormalities early in life will slow down or potentially prevent secondary irreversible changes occurring that would otherwise compromise the airway further. This emphasizes the importance of critically evaluating how well you pet can breathe early in life and seeking professional advice.

Is there a way of preventing this disease?

Since the condition is inherited it is important not to breed from animals that suffer from BOAS (even if they have had surgery) as their offspring will also be affected. Unfortunately, most show animals in affected breeds have been deliberately bred to produce the external appearances that are the result of these defects (such as a very short nose and flat face) so the defects are present to a greater or lesser extent in all animals within the breed. Ultimately BOAS is a significant welfare issue in brachycephalic breeds and the only way this can be alleviated is by breeder acceptance that extreme conformations (such as excessively short noses) are not desirable in dogs.

If you are worried about your pet in any way, but especially if it appears to have breathing problems, then you should contact your vet for advice.